UPDATE: Moon Man has moved back to California to continue working for his breeders, Thanh and Liz Duong of the CA Blackberry’s Herd.

Manny is a super sweet boy from CA! He’s got moonspots galore (and passes them on most the time), but he also comes from SUPER heavy milk lines!
His dam earned her *P as a 2nd freshener, giving 8.5lbs of milk in 24 hours! 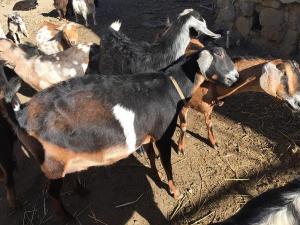 Other Relatives:
Moon Man’s paternal 1/2 sister got 1st in her class in the 2016 MDGA Fall V-Show:

“The first place doe is longer throughout.  She is sharper and more smoothly blended from the neck into the withers than the second place doe.  In mammary system A is placing over B for her advantage in mammary capacity and extension to the fore udder we are seeing today.” -James Oller

Before moving back to CA, we entered Moon Man is the first ever PNWMDGC Summer Sensations Show in Longview, WA 2019. At which, his first show ever, Moon Man took 1x Grand Champion and 2x Reserve Grand Champion! So proud of him and excited to hear of more conquests by this very special buck in future!