We entered BCF Legacy’s Star’s in Her Eyes as a yearling milker in the MDGA Summer 2017 V-show.

She placed 6th out of 8 entries in both rings:

“Entry B over Entry H in general appearance for better blending of neck into withers, stronger and straighter in the topline and she blends more smoothly from the chest floor to the barrel. I will be anxious to see this lovely doe next year when she freshens again for a more capacious udder.” -Lavinia Allen

“B places over H primarily for general appearance.       She has greater extension of brisket and is more smoothly blended from neck to shoulders.       In mammary system, she is higher in the rear udder, though she will yield some capacity to H.” -Katie Wolf

We entered FCH TW Ranch Fancy’s Bebe Girl as an “Aged Milker” in the Summer V-Show.

Bebe placed 4th and 3rd out of 4 entries (all Green Gables goats):

“Entry A is to be commended for her medial suspensory ligament support to her udder and the capacity of her udder.” -Lavinia Allen

“In a close bottom pair, A places over D for general appearance. She is more nearly level from hips to pins and has more depth of heal. In mammary system, she has slightly greater capacity. She yields to the more smoothly blended front end of D.” -Katie Wolf

BCF Legacy’s Broadway Blondie (one of Bebe’s kids this year) was entered as a Junior Doeling.

Blondie placed 4th and 1st in a class of 16 kids! Way to go Blondie!

“Entry B over Entry I in General Appearance. Entry B shows smoother blending of her neck into the withers and a more moderately extended brisket. Entry B also has an advantage in Body Capacity for being deeper in the heart and barrel.” -Lavinia Allen

“B places over F for an advantage in dairy character. She is longer and leaner in the neck, sharper at the withers, and more angular throughout. In general appearance, she also has a longer bone pattern throughout.” -Katie Wolf

“Entry A over Entry J in General Appearance. Entry A has a longer leaner neck with straighter rear legs when viewed from the rear.” -Lavinia Allen

“A places over C for general appearance. She has greater angulation through the hock in side profile. In body capacity, she has slightly more depth relative to her size.” -Katie Wolf

BCF Legacy’s Better All The Time was in the Junior Doeling class,
She placed 7th and 6th out of 16:

“Entry C over Entry M in General Appearance. Entry C is straighter in the forelegs and wider between the hocks.” -Lavinia Allen

“C places over H for general appearance. She is more level over the topline, being slightly stronger through the chine and more nearly level with greater length from hips to pins.” -Katie Wolf

We then entered BCF Legacy’s Broadway Sensation as a Junior Buckling.
Brody came 1st and 3rd in his class!

“Entry B over Entry G in General Appearance because he shows more height in the withers, longer and leaner in the neck and smoother blending from loin to rump.” -Lavinia Allen

“B places over G for general appearance, with more length and levelness from hips to pins. In dairyness, he is longer and leaner in the neck.” -Katie Wolf

Very Happy with these results, and eagerly awaiting results for the Fall Show! 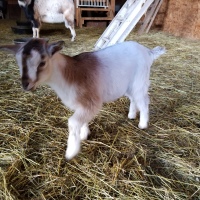